This small volume you are holding in your hands right now—after having opened up the box in which it was shipped to you—(FIG 1, 2) marks an attempt to bring together questions and thoughts, and to instigate debate on the contemporary urban condition. Be it personal observations or professional investigations, all of them fit neatly inside a pocket—to be carried around, and discussed openly, rather than stacked away on a shelf. 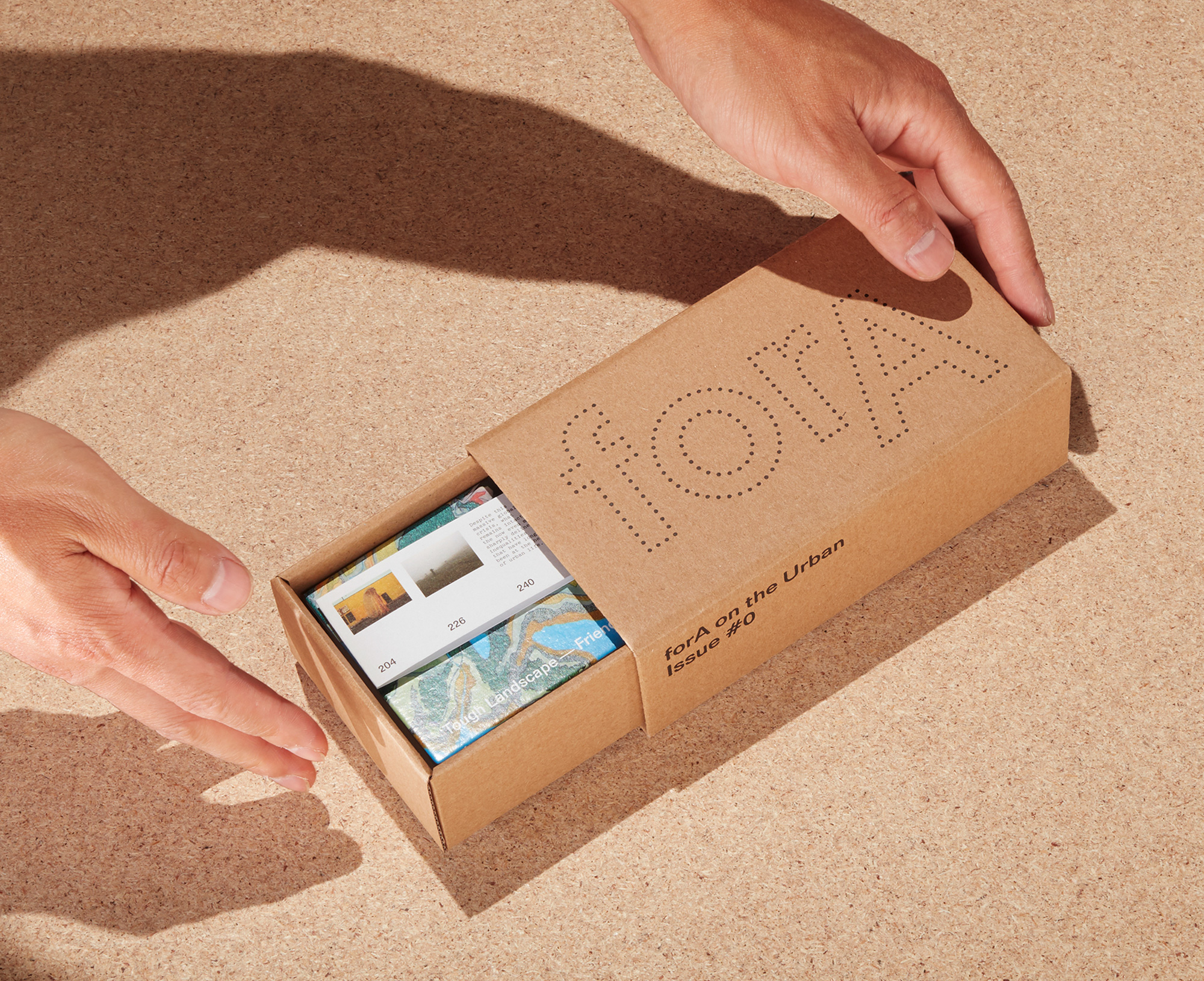 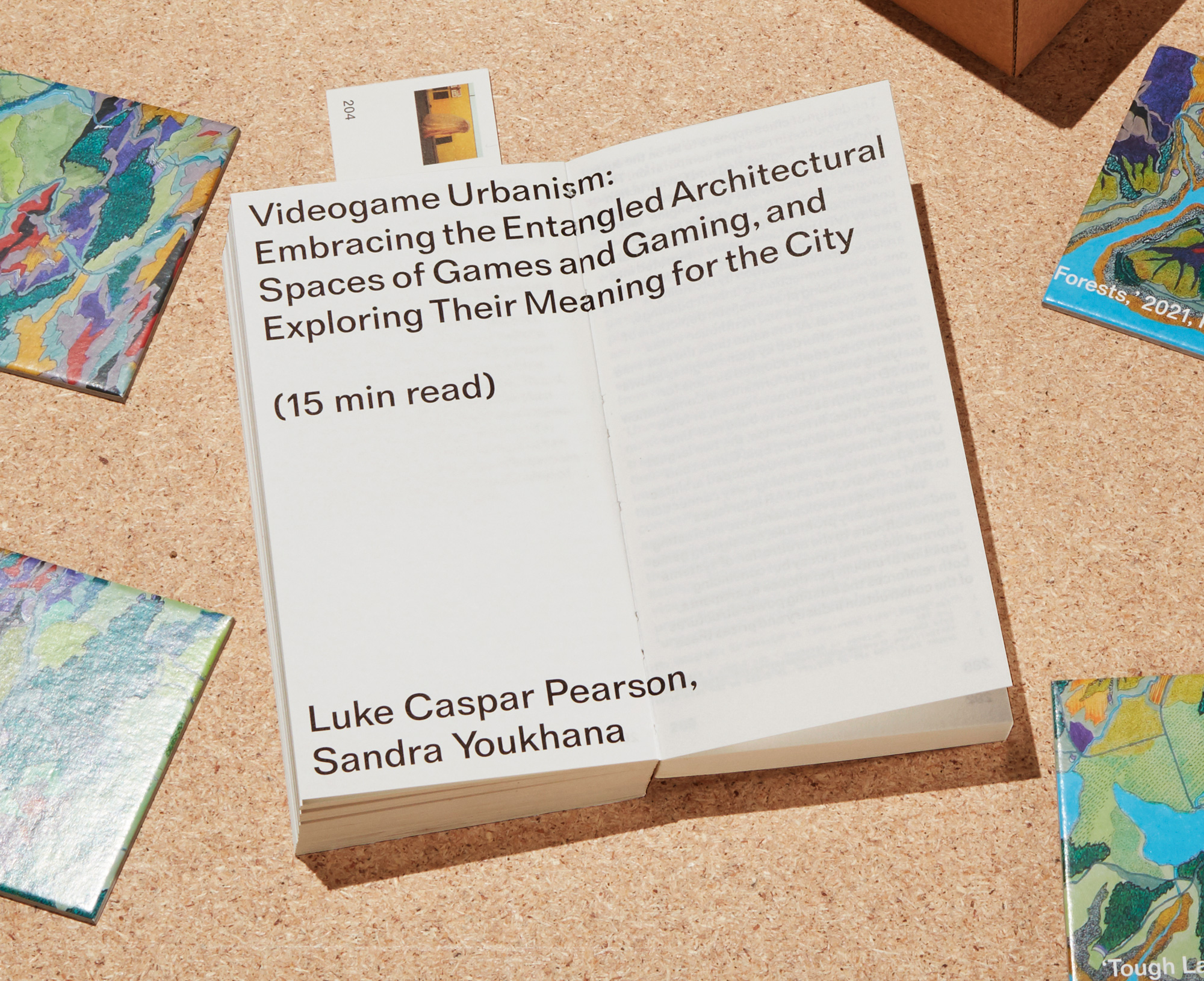 In an era portrayed as predominantly urban, the abundance of generalitizations, commonplace misunderstandings, and redundant discourses that hamper debates about urban phenomena is, in many ways, frustrating. Like physical objects, the meanings of the term “urban” itself have been worn away through use. forA on the Urban aims to be a proactive tool with which to resignify this word, linking it with a myriad of diverse and plural notions, which are at the same time based in concrete and geographically localized positions.

forA on the Urban was initiated by a shared interest in abandoning abstract and generic notions of the urban, favoring a multiplicity of approaches around the world. Jakarta, Prato, Vienna, Accra, Ohio, Bogotá, Mumbai, and Shanghai are by no means similar realities. Urban ensembles around the globe may share comparable dynamics, but in their respective localities, situations, challenges, and conflicts they are inescapably specific. In the same way that their practices are related to dissimilar historical, geographical, and sociocultural contexts, these and many other cities and urban phenomena invite a multiplicity of readings, analyses and interpretations, hailing from varied perspectives as well as degrees of knowledge and expertise.

forA—being the plural of forum (and with an emphasis on the A for architecture)—is essentially a platform for discussion, composed of three interdependent and parallel manifestations: a physical journal, a website and a platform for live events. Through this tripled format, forA aims to become a vehicle for study and dissemination, stimulating dialogue around urban phenomena, wherein every issue, website entry and conversation triggers new subjects, realities and facets that can be incorporated into further instalments.

The project is in itself a communal endeavor, just as the very same notion of the urban necessarily embraces diversity, multiplicity and the collective as its fundamental conditions. And so the first publication, forA on the Urban Issue #0, is indebted to the efforts, generosity and interest of multiple individuals: the initiative of the Angewandte’s rector, Gerald Bast; the academics who accepted invitations to the Advisory Board; those who submitted abstracts in response to the Open Call, launched in early 2021; friends, peers, and fellows who enthusiastically contributed writings, drawings, and images, or responded to a questionnaire on the urban condition; those who made up the external reviewers as well as the review advisory board; and everyone who worked behind the scenes to improve the quality of what was finally published. The texts and images on this website were first published in issue #0, and the online offering will continue to grow.

From the outset, the inspiration behind this first collection of contributions was to propose dilemmas and invite inquiry. Organized by length and reading time, (FIG 3, 4) the present assembly of contributions displays an array of open-ended reflections on the urban, resisting easy categorizations, or conventional linear systems of order. By following this logic, starting with straightforward, sharper visual responses and progressing onto longer, more discursive ones, the compilation does not force artificial conjunctions. Depending on the sequence of reading and re-reading, and on the preoccupations of the readers themselves, forA seeks to induce productive and surprising alliances, to capture the attention and, finally, to immerse the reader in contemporary debates, discourses, and controversies surrounding the human impulse to modify the environment. 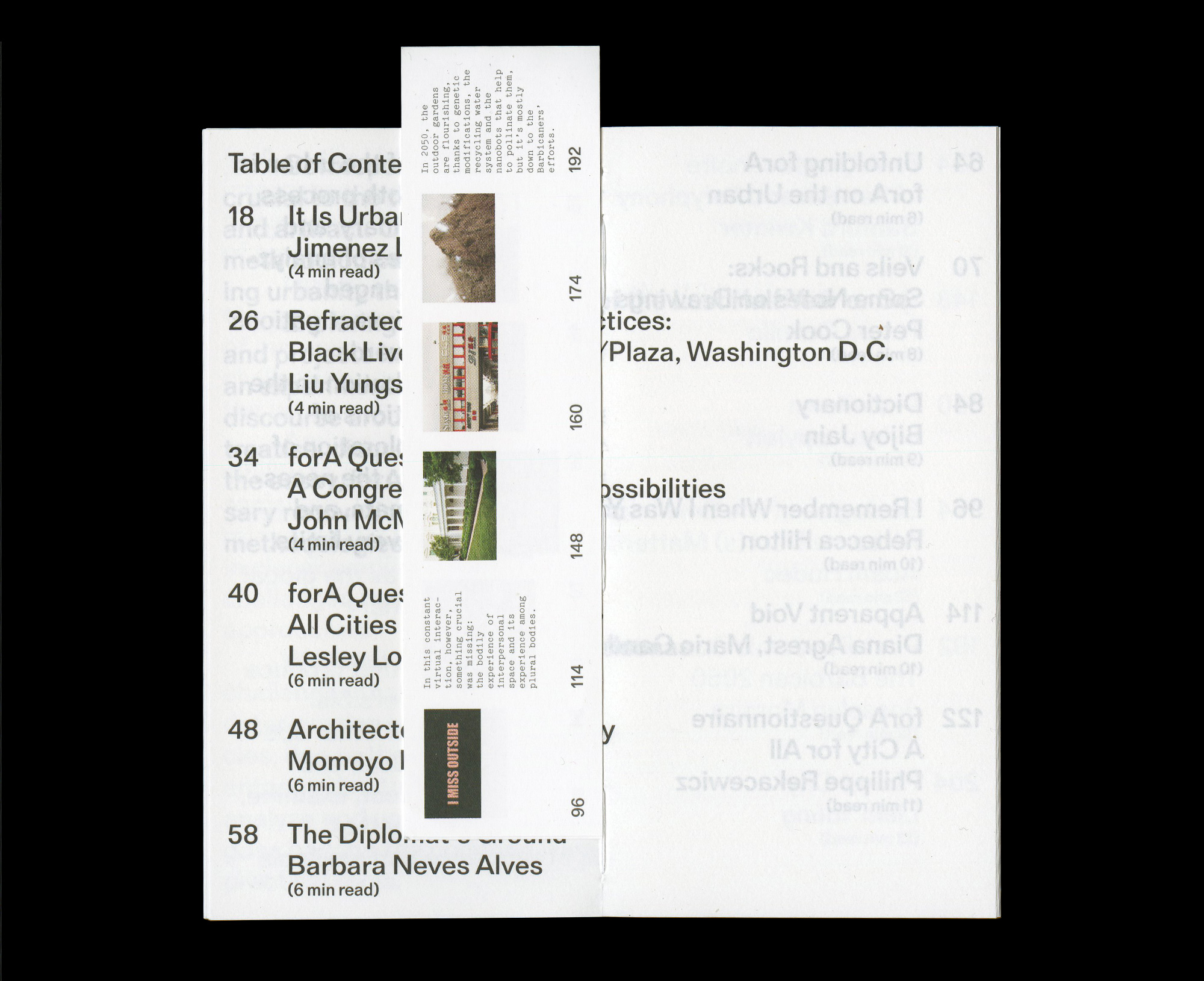 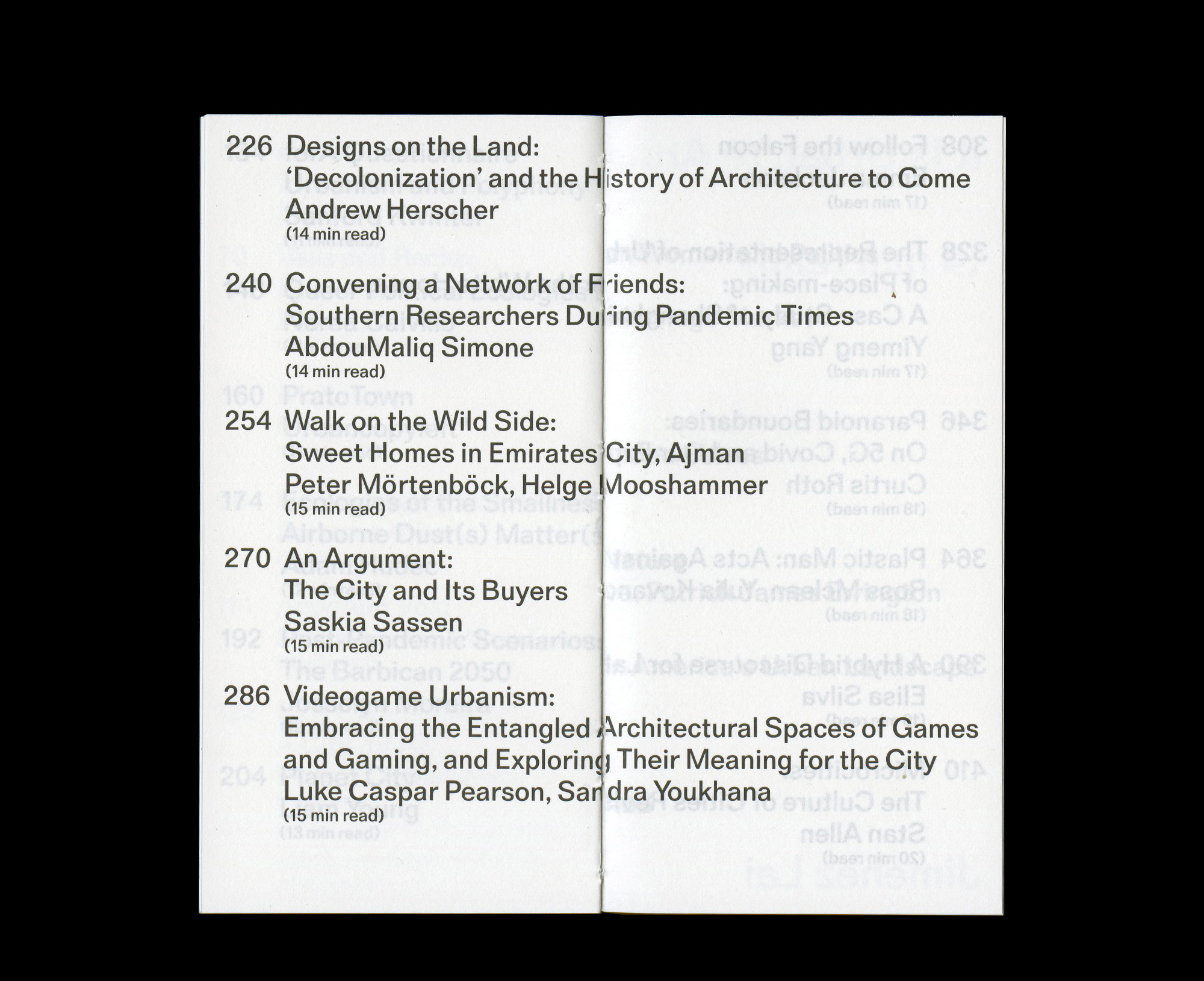 Issue #0 places emphasis on the necessity and the generative potential of approaching the urban as multilogue, addressing its different scales, dilemmas, and perspectives in an effort to move beyond the cemented understandings of “expert” or disciplinary approaches, and open up many new and lively fora. This first edition is the starting point for multiple discourses to be unpacked. Consider it a sort of a starter engine for conversations around the present and future of the urban.